The theme for Week 2 of the Golden Oldie Thursday Challenge is stripes!  I have no natural artistic talent, so elaborate nail art is just never going to be my thing, but even the likes of me can use striping tape, so this simple nail art theme is right up my alley.  I’ve been having a blast looking through my stash for polishes that I once loved for a brief moment (which is increasingly starting to seem like the only way this magpie has ever loved a polish).  It was hard to settle on one for today’s challenge!

It must have been two or two and a half years ago now when all of us became obsessed with matte glitter at the exact same moment, and it was at that time that I purchased Fine Print from Alta Costura Vernis.  Fine Print is a textured polish that features white, black, and red micro glitter in a clear base.  This was one of the first intentionally textured polishes that I ever purchased, and I remember loving the finish as well as the combination of colors in this polish.  I also loved how the little white bits in it looked under the black light on a night out, because yes I am staring at my nails even when I’m at the bar.

I layered Fine Print over Zoya Christinna, which is one of the only white polishes that works with my skin tone.  Christinna is a soft, shimmery white that has the slightest hint of gray; it almost has the look of marshmallow creme or a fluffy white cloud.  I’ve used this shade several times in the 3 or 4 years that I’ve had it, and I always love the color and hate the application.  Christinna is very streaky, and no number of coats seems to be able to completely even it out.  In my experience it also takes longer to dry than most polishes, which wouldn’t be as bothersome if the polish weren’t so sheer.  In spite of these issues, though, I really do like the color and finish of Christinna, so I put up with her flaws.

I used two coats of Christinna as a base for this mani, then I used one coat of Fine Print over striping tape to make some stripes.  I was going for some gradation in the thickness of the stripes on the middle and ring finger, but my recently broken middle finger nail probably wasn’t long enough to show this effect properly.  I used base coat but no top coat for the photos. 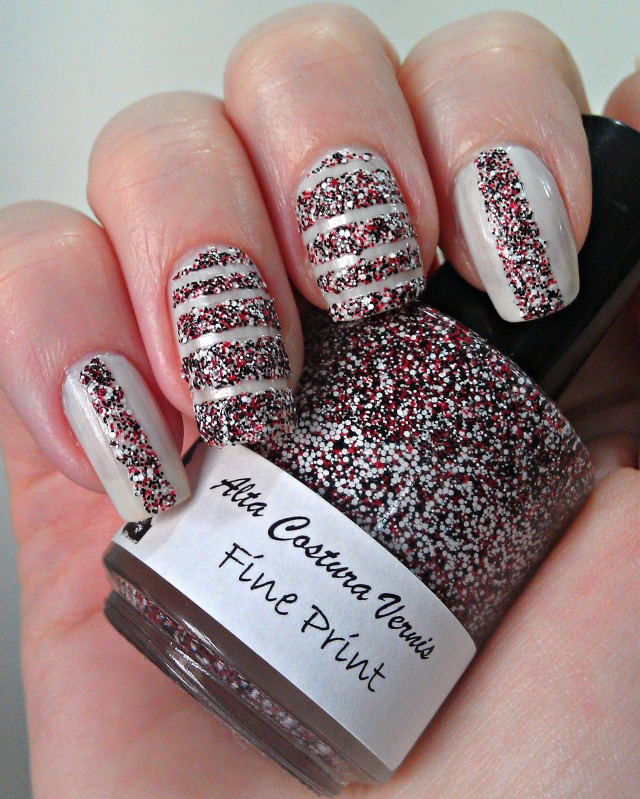 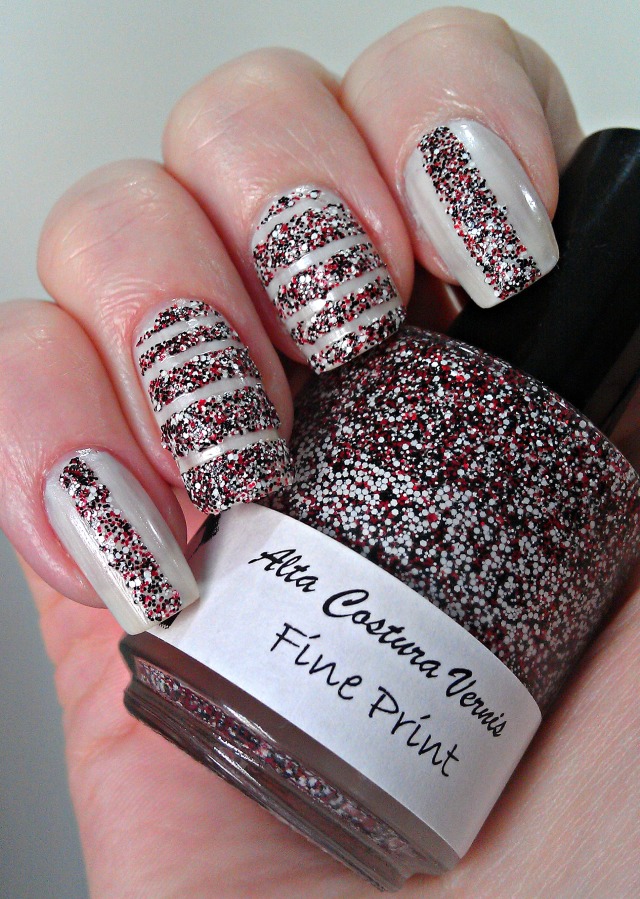 Are you officially over these matte glitter textured polishes?  They seem to have definitely passed their peak in popularity.  I know I don’t wear them all that often anymore, but wearing this one again reminded me of how truly different they were from everything else that was out at the time.  I have noticed that all of my polishes that feature matte glitter tend to thicken up pretty quickly.  I had to add thinner to Fine Print before I could use it.

I purchased Fine Print for $8.00 or $9.00 (somewhere around there) from Alta Costura Vernis.  I’m not sure if this brand still exists, honestly.  I don’t see any evidence that they do.  I purchased Christinna from the Zoya online shop during a promotion (I only purchase from Zoya during their promotions).  It cost me $4.00 when it was on sale.  I don’t see this shade on their site, so it may have been discontinued.

There was an error retrieving images from Instagram. An attempt will be remade in a few minutes.

Because painted nails are everything

Welcome To The Watermarble Capital

A fashion blog of a Sydney student, exploring the world of style

- A History girl with a passion for books, knitting, food, and all things glitter -

Crafts + Nail Art = Happy Me. Does it make a happy you?

everything you need to know about general nail care to the latest nail trends!

Tips, tricks & honest reviews for all sorts of beauty products!

eat up from crafty goodness with this creative mama